Do You Ever Feel Guilty About Having More Than Others?

I used to feel so guilty because I seemed to have a better life than my siblings and other family members. I tried for years to be everyone’s savior by fixing all of their problems. And, when nothing changed, I would feel frustrated and disheartened, which led to feelings of failure, even worse than before.

Then, one day, I found comfort in reading Galatians 6:7 of the Bible, which says that you will harvest what you plant. Upon reflection, I soon realized that if you’re not willing to change how or what you “plant,” your circumstances and outcomes will most likely remain the same.

Like everyone from time to time, we tend to get comfortable with our surroundings—difficult or not—and we feel safe in knowing what we know. It’s like living life in a dark hole: it may be dark, but the darkness is familiar to you; it’s all that you know. Thus, you won’t climb out of the familiar darkness until forced or otherwise enticed to do so. And, once you begin climbing out, the ones left behind in the dark will sometimes try to pull you back, out of jealousy and fear of the unknown.

This image reminds me of the story of the little frog in the well by poet Percy Bysshe Shelley:

There was a frog who lived in a well, happy and content. He thought, “I am the monarch of all I survey,” assuming that the well was the whole world. During one monsoon season, a frog from a nearby ocean came floating by and fell into his well. He described for the resident frog all about the ocean, its vast expanse, and all of the creatures—big and small—that lived there. The resident frog did not believe him until another, bigger flood came, this time carrying him out of his well and into his newfound friend’s ocean.

What a surprise! His little world changed, and he became a believer! 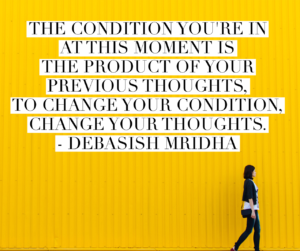 I have learned through my own life experiences that you can only change yourself, not other people, unless they are committed to changing themselves. Instead, you can encourage them to take the first steps in climbing out of their dark holes, and once you see them climbing upward, give them a boost by offering a helping hand!

Make sure to pre-order God Gave Us Wings by Connie Rankin available at the retailers below.